In the town centre, situated in Roma Square, there is the neo-gothic St. Mary and St. Peter’s Church., Patron Saints of Pedaso, built in 1897 on a project of Ing. Fagioli, and finished in 1929. 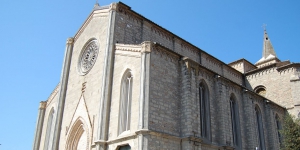 The facade shows an artistic rose window while the interior is Latin cross shaped, with three naves characterized by big ogival arches. The side chapels and the presbytery are illuminated by high stained glass windows representing Jesus and St. Francis’scenes of life. Particularly valuable are a Holy family with St. Giovannino, dated back to 1750 and attribueted to Filippo Ricci, which is kept in the sacristy and a precious organ which has recently been restored. 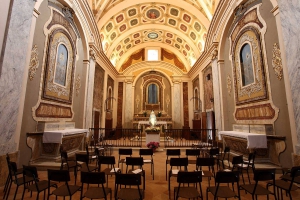 Going on this way, it is possible to see the “Small Church” dedicated to the grieved Virgin Mary, it was the only parish church present in the town until the beginning of the XX century. When the other church was built, the “Little Church”was closed to worship and it underwent a gradual degradation. In 2007, after a long refurbishment works, it was given back to the town and it now represents a precious jewel of Pedaso, worth to be visited. 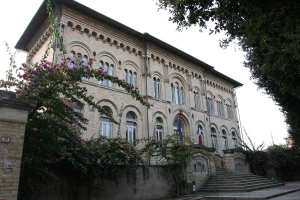 In front of St. Mary and Peter’s Church there is the Primary School, inaugurated in 1927. Its façade shows a series of mullioned windows, triple lancet windows and a nice entrance staircase, opened on the two smaller sides. Nearby, is situated the War Memorial Monuments, to remember the victims of the World Wars. Going on towards the southern part of Pedaso, you can admire the majestic Bruti Mansion, characterized by the peculiar double staircase entrance on the façade and the big park plenty of rare trees and bushes. Particulary worthy of attention is the Ancient Municipal Building with its bicentenary clock tower, which still beats the time, and the elegant building next to it, characherized by a mullioned window with a balcony and a rooftop loggia with three arches.